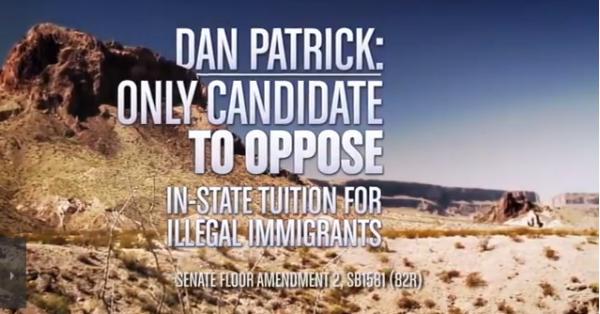 The Texas House on Tuesday passed a major marijuana reform measure, House Bill 63, on a 104-43 vote. It was an historic occasion, marking the first time in nearly a half century that the Texas legislature has moved to reform the state’s marijuana laws. Then Lt. Gov. Dan Patrick reminded us that he is in a position to unilaterally thwart passage of a worthwhile bill that has elicited bipartisan support simply because he personally is against it. “Criminal Justice Chair John Whitmire is right that HB 63 is dead in the Texas Senate,” Patrick tweeted Tuesday morning, referring to comments the Houston Democrat had made a day earlier. “I join with those House Republicans who oppose this step toward legalization of marijuana,” added Patrick, the former broadcaster and sports bar owner. The lieutenant governor is entitled to harbor schoolmarmish opinions about “reefer madness,” and to foist those opinions on the rest of us by refusing to let the Senate version of the bill come to the floor.

However, Whitmire, the longtime chairman of the criminal justice committee, supports H.B. 63, authored by Democratic state Rep. Joe Moody of El Paso. On Monday, after the measure gained preliminary approval in the House, Whitmire had put a damper on things by explaining that he isn’t planning to hold a hearing on the Senate version of the bill, sponsored by Democrat Jose Rodriguez of El Paso. He argued that to do so would be an inefficient use of time as the session enters its final month. Patrick has the power to decide which bills come to the floor – and he’s made his opposition to this one clear. So Whitmire wasn’t optimistic when I caught him on the phone Tuesday afternoon, though he hadn’t totally given up. “I hope sooner, rather than later, I will have enough votes to pass it out of the committee,” he said. “There’s time for people to express themselves,” said Whitmire.

House Bill 63 would classify the possession of small amounts of marijuana (less than 1 ounce) as a Class C misdemeanor, analogous to a traffic ticket, and reduce the penalties associated with the offense. A 2018 poll by the University of Texas/Texas Tribune found that about 7 in 10 Texans support such a change to state law, which now classifies marijuana possession as a Class B misdemeanor, punishable by up to 180 days in jail. In fact, more than half of respondents expressed support for the legalization of marijuana, at least in small quantities, for personal consumption. And although Republican voters may be leery of a slippery slope, the party’s own platform supports decriminalization. In other words, many Texans would agree that H.B. 63doesn’t go far enough. Moody himself, an attorney by training and the speaker pro tempore, agrees. As filed, the bill proposed decriminalization of minor possession. During floor debate in the House on Monday, he explained that he backed off of decriminalization for possession of small amounts of the drug to improve the chances that it would reach Gov. “If this is what we can do, then this is what we must do,” Moody said, noting that 75,000 Texans are sent to jail each year for this particular offense. He’s right. Many Republicans think so too. And the Senate version of the bill might be able to muster enough crossover support to pass the upper chamber, too. But more than likely, we’ll never know. Dan Patrick on this issue is out of step with the majority of Texans. For him to declare H.B.

There is no power, no gasoline, no running water. Houses are under water, cars are floating through the streets, inhabitants are sitting in the dark, in ruined houses and are cut off from the outside world,’ he said. French President Emmanuel Macron’s office said he would go to the islands as soon as the weather permits it. Saying he was ‘grief-stricken,’ Macron called for concerted efforts to tackle global warming to prevent similar natural disasters. A Dutch navy ship arrived in St Martin with vital supplies. And two Dutch military aircraft were being sent the island of Curacao and on to St Martin to deliver food and water intended to last the population of 40,000 five days. The aircraft were carrying 100 extra troops to deliver aid, repair infrastructure and restore order. Meanwhile, residents on the British Overseas Territory of Anguilla said the island was ‘utterly devastated’ and looked as though it had ‘suffered nuclear bomb devastation’ while shocking videos have emerged showing the scale of the devastation in the British Virgin Islands.

Hurricane Irma has ripped through Caribbean islands on a path towards the US. Tracking the storm: This model from European Center for Medium-Range Weather Forecast shows the projected path of Irma. The UK government says Irma has inflicted ‘severe and in places critical’ damage to the British overseas territory of Anguilla. Foreign Office Minister Alan Duncan says the Caribbean island took the full force of the category five hurricane. Britain sent hundreds of troops and the Royal Navy flagship HMS Ocean to Anguilla, Montserrat and the British Virgin Islands. Two military transport planes loaded with ‘personnel, supplies and recovery equipment’ set off for the Caribbean this morning – with one heading for the British Virgin Islands. On the ground, governor Gus Jaspert said he had declared a state of emergency, indicating there had reports of both injuries and deaths during the storm. Apart from structural damage, there have sadly been reports of casualties and fatalities,’ he said in a recorded message to residents.